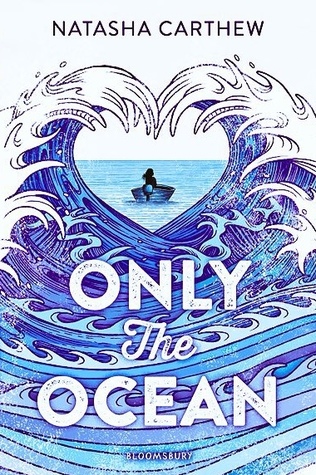 Title: Only the Ocean

Kel Crow lives in a dead-end swamp with her deadbeat family and a damaged heart. But she has a plan to escape. It’s a one-two-three fortune story that goes: stow away on the ship, kidnap the girl, swap the girl to pay for passage to America and a life-saving operation.

(Taken from the book jacket)

As usual, whenever I see a sea- or water-theme on a cover, I must magpie it and add it to my book hoard. I had seen Only the Ocean on my bookstagram feed, but I refrained reading around it to not ruin my reading experience. And boy, was I surprised. I was expecting something on the lines of Life of Pi, but instead I got queer dystopian literature on the high seas. I have never been more shook by a reveal in my life — in the most positive way possible!

What immediately hit me, and what I probably liked the most, was the prose. I know Carthew’s writing style might not be popular among most readers, but I personally loved its flow. The prose followed the ebb and flow of the ocean; one may resist it and hate it or embrace it and let themselves be transported. Perhaps I’m accustomed to reading modern and post-modern literature, but I had no issue letting myself go. Its language is heavily synaesthetic and the author displays linguistic mastery through the use of vivid consonances and assonances. I felt the writing, felt Kel speaking it, and as a synaesthetic individual, there is no greater joy. It is different, it is unique; it is great.

But yes: not many people will be a fan of it because of how different and “weird” it may seem.

The early morning sky was much like every other: heavy heaving clouds circling and spitting gumball lead that caught on the wind and fired furious like bullets.
– Only the Ocean

Kel is an interesting protagonist: fierce, gritty, and determined to a fault. At times she may appear unsympathetic, but at the heart of her actions is a desperate scramble for survival. I love that she is not a hero; she is a human who desperately wants to live. Her barriers come down as the story unfolds, and what bubbles to the surface is her raw love for life, no matter how hard it may be. She is full of sharp and jagged edges that protect her soft, hopeful core. Kel Crow is smart, tough, starved for affection and fiercely determined on securing a better, brighter future. The struggle for life is the ultimate struggle; Kel went all out to win it, and that was what made her story so beautiful to read.

There were enough wilds in her as it was; enough of the unknown to declare herself uncharted, a standalone live-alone island, a rock, no matter how she crumbled inside.
– Only the Ocean

The dystopian setting is very essential: few, but precise brushstrokes outline it with great effect. I believe there is much more dread in what isn’t said than what is. Kel’s past of abuse is skirted around, darkly implied and touched in passing until the big reveal, which made it all the more terrifying. What made England a swampland? What happened to divide the population into rich towers and and poor swampfolk? If the revolution Kel and Rose witnessed is something to go by, history until then must have been steeped in bloodshed. You don’t want it to reach your or their lips. In other circumstances, I would have liked more engagement with the setting. However, as this is a character-driven story and the protagonists are stranded at sea, less was more. People — Kel and Rose — were at the centre of this story. The world didn’t swallow them in excessive detail and backstory; it kept them afloat.

Kel was always running from something. Running from or running toward, but in any case it was all escape. Escape from the here and now, from the world she inhabited within and the world that bullied her from the outside.
– Only the Ocean

For a story that depicts a lot of misery, loss and suffering, it left me feeling positive and hopeful at the end. I loved the way in which the characters and the story evolved, and the ending was a triumph of life and hope.

And the gays don’t die at the end! I feared Rose would but I was so infinitely glad she didn’t.

Overall, I boiled down most of my issues to two things: Kel’s age and the baby. I didn’t find fifteen to be a convincing age for Kel. She didn’t sound, act or think like a fifteen-year-old, rough upbringing or not. Picturing her as young as fifteen felt jarring to me; before her age was revealed, I naturally imagined her to be at least seventeen, and I kept imagining her as such.

The baby, Rosen, didn’t feel convincing or necessary. He is just shoved between the two girls throughout the story. He doesn’t come across as a convincing baby because he is barely described or heard save for a few exceptions that suddenly remind the readers that yes, he exists. It felt jarring to me every time he appeared. Following the events of the story and what I know of babies (which admittedly isn’t much, but I did look after my baby cousin and my mum and grandma shared their ancestral knowledge with me), this baby should have died ten times over — either because of the cold, starvation, illness or drowning. Ultimately, his presence felt unnecessary to the story: I understand his function is to mark a change of heart in Kel towards the end with his naming, but her dark past and her departure from it are already plenty. It doesn’t add another layer of shock to Kel’s past (and adding terrible things just for the shock factor is a pet peeve of mine, so I hope that wasn’t the real purpose of Rosen’s presence in the story). Kel’s motivations and transformation as she moves on are already clear, leaving no strong purpose for the baby.

Finally, I encountered a couple of typos (like “slide” instead of “slid,” “accept” instead of “except,” missing quote marks). Very minor, but I found them nonetheless.

Would I recommend this book? Yes.

Other books like this: I can’t think of a book that is similar to this in terms of plot and character; Life of Pi shares a similar setting — a child is stranded at sea with a tiger — but Black Flamingo is another queer story with a very original, fresh take on form and prose that I warmly recommend!
(Links redirect to Goodreads)

One thought on “Only the Ocean – Book Review”