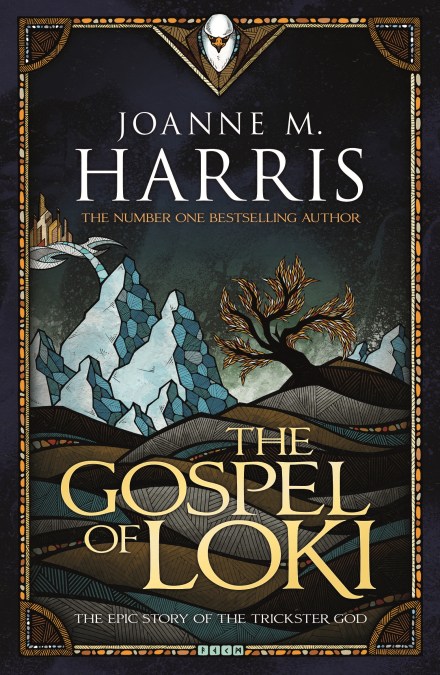 Title: The Gospel of Loki

The novel is a brilliant first-person narrative of the rise and fall of the Norse gods – retold from the point of view of the world’s ultimate trickster, Loki. It tells the story of Loki’s recruitment from the underworld of Chaos, his many exploits on behalf of his one-eyed master, Odin, through to his eventual betrayal of the gods and the fall of Asgard itself. Using her life-long passion for the Norse myths, Joanne Harris has created a vibrant and powerful fantasy novel.

Loki, the Light-Bringer, the misunderstood, the elusive, the handsome and modest hero of this particular tissue of lies. Take it with a pinch of salt, but it’s at least as true as the official version, and, dare I say it, more entertaining.

So far, history, such as it is, has cast me in a rather unflattering role.

Now it’s my turn to take the stage.

With his notorious reputation for trickery and deception, and an ability to cause as many problems as he solves, Loki is a Norse god like no other. Demon-born, he is viewed with deepest suspicion by his fellow gods who will never accept him as one of their own and for this he vows to take his revenge.

From his recruitment by Odin from the realm of Chaos, through his years as the go-to man of Asgard, to his fall from grace in the build-up to Ragnarok, this is the unofficial history of the world’s ultimate trickster.

How I got it: Shopping with friends at Waterstones.

When I got it: Last year.

Why I want to read it: One of my friends warmly recommended this to me. The cover art also drew me in. Plus, as you know, I love almost everything Gollancz publishes. So, when we went out book shopping, I caved in and got it.

One thought on “Shelf Control #4”