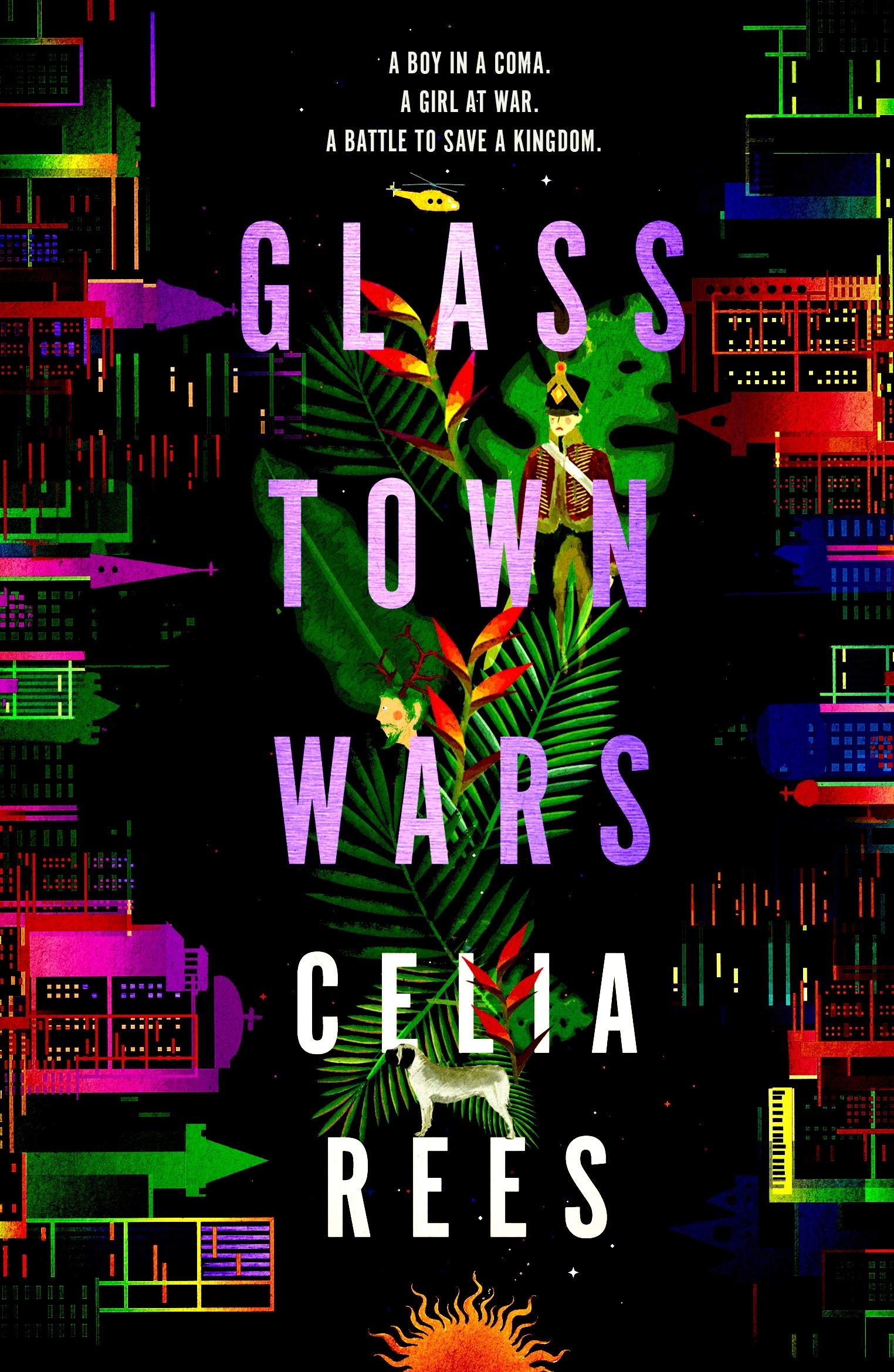 I was approved to review a digital review copy of this book on NetGalley in exchange for an honest review. After examining the publisher’s profile and finding no indication of their preferred timescale, I am publishing this review now. It will be cross-posted on NetGalley and Goodreads.

All these Glass Town intrigues. No matter how long you’d been absent, how far you’d travelled, once you were back, it was as though you’d never been away.

Tom and Augusta are from different places and different times, but they meet in the virtual world to combine forces in battle, to save a kingdom, escape a web of deceit and to find love. In a place where fictions can be truths and truths fictions, learning who to trust is more than friendship, it is about about survival.

Glass Town Wars, inspired by the early writings of the Brontës, is a captivating, magical novel by the renowned Celia Rees.

I was confused by the fact that I was approved to review an advance copy on NetGalley. The book is slated to come out in September 2020, but as you may have noticed from the links above, it seems it has already been published. Is this an advance copy or something else?

Regardless, I would like to preamble this review by saying that I physically could not bring myself to finish this book and had to leave it at around the 40% mark. I rarely do not finish a book, no matter how bad it is, but Glass Town Wars was genuinely impossible to read. This review will cover what I have read of the book and explain as precisely as I can why I found it so hard to enjoy.

Glass Town Wars follows Tom, a child in a coma who is given the opportunity to enter the world of a videogame. There he meets Augusta, a warrior determined to assert her agency over her life and fight for her freedom. Their paths intertwine and as they help each other, they fall in love. However, the more Tom becomes invested in the videogame world, the more he draws away from his family, his friends, and his reality.

The concept sounded amazing and fresh. It made me think of the movie Avatar (the protagonist becomes more and more dependent on his surrogate body when his human body has suffered partial paralysis and forces him in a wheelchair, and in this way romances his otherworldly love interest), within a Ready Player One-like framework and the melancholy of Bridge to Terabithia.

I can appreciate the way in which “real-life” Tom was conjured. Despite the problems I outlined below, I did find his frustration at his condition realistic. I could feel his powerlessness. Being able to sense the other characters only via sound, smell and occasionally touch added a veil of fear which I believe would have enriched his character if built upon more.

When I was accepted to review this book, I was incredibly excited. I was looking forward to themes of family love and friendship, fantasy and reality, to an engaging bildungsroman that would see Tom (and Augusta) mature. All of this in a YA format seemed like the perfect recipe for a new bestseller. Alas, none of my expectations were met.

If this really were a game, it would be a very glitchy one.

The first chapters (1-5) are confusing, disjointed and frustrating to read, and effectively encapsulate most of the book’s problems going forward. To avoid spoilers, I have tried to limit my discussion to the first five chapters, as the following chapters present the same issues. I have identified them as follows:

There is no clear sense of storyline or plot or stakes. I am suddenly being introduced to a large number of characters – often without context – but relationships among them and to the plot are not clarified. There isn’t a clear antagonist that spurs the characters into action. What do they want? What is stopping them? How? How do they overcome it?

The writing is disjointed, fragmented and bland. I often struggled to follow the narrative progression within the same paragraph, and none of the descriptions had anything particular or unique about them. There is a recurrent and often incorrect use of semicolons which exacerbates the already long and winding descriptions.

Throughout, the action keeps switching scenes without any apparent logical progression or build-up (e.g. in Chapter 8 Augusta was talking to a messenger and suddenly they are being attacked by something undefined as the messenger is reporting on it).

Pace and plot are swamped in exposition, resulting in a slow and uneventful read. Diction is at times too colloquial for prose and would be more appropriate if limited to speech (e.g. “he kind of bonded with them”).

Consequently, the world-building falls flat. Many things and sights are mentioned, but not built upon. While certain descriptions go on for several sentences, there is a very vague and nebulous sense of place. I have no idea where the game/book is set, if it’s similar to our world or not, what kind of history it has, who are its people and what kind of strife is tearing them apart.

Many things are mentioned but never contextualised. For instance, in Chapter 2 we see Tom in a coma and Milo mentions “hashtag heroinacoma.” While I appreciate the difficulties a boy in a coma may have concentrating, as a reader I would have liked a bit more context around his situation: why is this hashtag important? How did he end up there? What even is Milo’s relationship to Tom? I mildly understood that they used to be friends but Milo presents itself more as antagonistic than amicable.

I think more context could have been given easily, since Tom has the presence of mind to hear Milo’s arrival from a mile away by the sound of his shoes, as well as reminisce about when Milo passed his A levels and his wealth. There is a little bit more about Tom in Chapter 6 or 7, but still nothing that would give me any relevant context or make me care.

The introduction to the VR project is rushed and feels incredibly improvised, almost like an afterthought. Being named after a mythological fish did not make it more intriguing, just somewhat weirder. There is apparently no rhyme or reason to this project other than “it seems cool.” It becomes secondary during the story while I believe it should have continued to play a central role.

In Chapter 3, the “Twelve” and the “Genii” are mentioned without a clear explanation of what they are, who they are, and how they are relevant. In Chapter 4, there is a mention of the “Glass Town Faction” even before we know what Glass Town is and that there is a war going on.

There is little insight into the main characters, let alone the others. There is little to no sense of voice or point of view, of motivation or emotion. They feel two-dimensional. They’re built out of exposition, not action (telling instead of showing). As a reader, this completely shuts me out from the narrative.

I believe the audience of this book should be redefined. On NetGalley, this is identified as “Teen&YA.” Considering other examples of famous YA literature in circulation, this one (as it is) cannot compete fairly. I don’t think it would appeal to a sixteen-year-old reader or older; an age range of about 10-12 y.o. feels more appropriate to me.

This spasmodic and fragmented kind of narrative will hardly appeal to younger readers, to whom this book is marketed. It makes the book hard to read and follow (even for an adult!), and thus will unlikely be to their taste.

There are several inconsistencies, some of which I have reported below:

There were several spelling mistakes, suggesting the book still needs to go through the proofreading stage.

I would like to mention Chapter 3 separately, as it was unfortunately, in my humble opinion, a complete failure. Hardly anything makes narrative sense and it left me disoriented about plot, characters, point of view, lore, place and time.

Overall, as the book stands now, it gave me the impression that this is more of a draft than a finished novel. It feels unpolished, incomplete. Unfortunately this book really wasn’t for me, despite the amazing premise that drew me in. I hope other readers will find something they enjoy in it.

Would I recommend this book? No.

Other books like this: Do check out Ready Player One by Ernest Cline if you haven’t already. It actually reads like a story and incorporates the hyper-VR element to great effect.