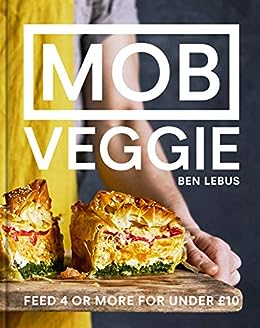 Flash Reviews are meant to give short, concise reviews on cookbooks and other assorted titles I happen to encounter. Rather than following the same format as regular book reviews, they will primarily focus on my overall experience of the book. I bought MOB Veggie around Christmastime, motivated by all the positive reviews it had received. I’ve been experimenting with this cookbook for a couple of months now, so I thought I’d write a few lines about it, just to… spice things up!

MOB Veggie presents itself as a sturdy book, with a solid cover and thick, richly coloured pages. It’s ideal for a kitchen’s messy setting, as I felt it could withstand random oil and sauce splatters without issue. The contents are divided into six different sections: recipes for breakfast and brunch; cold recipes; fast recipes; fuss-free recipes; flashy showstoppers; takeaway favourites. It delivers a wide variety of vegetarian and vegan recipes for large families with limited budgets.

I have made a point to try at least one recipe from each “chapter,” with a few more from the fuss-free and flashy ones. After experimenting for a couple of months, I want to challenge meat-eaters to going veggie for a month with this cookbook: I guarantee you’re gonna love it.

I live alone, and even by halving the ingredients, I ended up with very hearty portions. As someone who spends most of the day working on some thing or other, I don’t always  have the energy to cook. The generous portions meant that I had extra leftovers for the next day, which saved me so much time, energy, and money I would have otherwise spent on takeaways. If you also live alone but have a large appetite, just follow the indicated amounts and you will have a big meal with plenty to spare for the next day.

I loved how the ingredient lists are simple and short, keeping costs contained. There are no weird, hard-to-find ingredients, but rather all genuine things that have for the most part seen little processing. This in turn translates into straightforward recipes that are incredibly easy to follow. Added bonus: both grams and cups/spoons are used, so no need to fuss around with conversions. I’m not a master chef by any means, and I still managed to put together some really scrumptious dinners that even my Italian mum complimented. The pictures also offer a pretty accurate rendition of what your dish should look like (stylish plating skills aside).

The lists left enough leeway for personalisation. You like your polenta creamier? Add your own amount of butter. You like to put emphasis on the “cheese” in Mac&Cheese? Make that manchego rain. While vague instructions like “a knob of butter” or “a glug of oil” were often much more practical than actual measuring, these would benefit someone who already has an idea of the final product. Sometimes I wished the indications would have been a little more specific, particularly when attempting to cook something entirely new for which I had no scale of comparison. Lots of room for experimentation though!

Assigning a song to each recipe was an original spin on your traditional cookbook. Especially if you love dancing and singing around the kitchen like I do! All the songs can be found on Youtube or Spotify. Listening to them as I cooked really made the whole experience much more fun. I even discovered a couple of cool new artists!

Would I Recommend This Book? Yes!

Other Books Like This: I would suggest checking out MOB Kitchen as well.
(Link redirects to Goodreads)