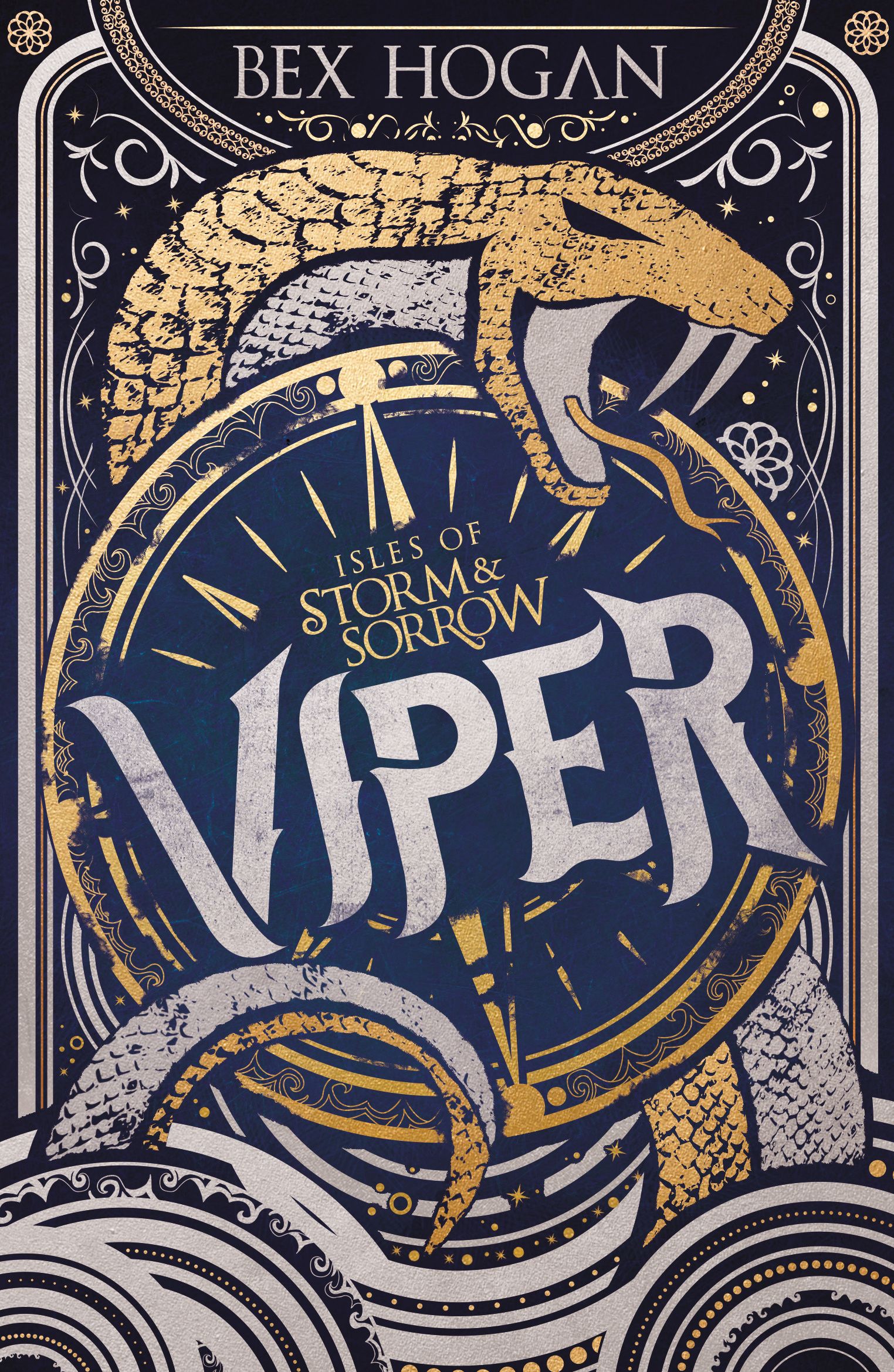 He will make me a killer. Or he will have me killed. That is my destiny.

Seventeen-year-old Marianne is fated to one day become the Viper, defender of the Twelve Isles.

But the reigning Viper stands in her way. Corrupt and merciless, he prowls the seas in his warship, killing with impunity, leaving only pain and suffering in his wake.

He’s the most dangerous man on the ocean . . . and he is Marianne’s father.

She was born to protect the islands. But can she fight for them if it means losing her family, her home, the boy she loves – and perhaps even her life?

(Taken from the book jacket)

I would like to preface this review by saying that I did not particularly enjoy this book. I didn’t think I’d encounter a book I wouldn’t be enthusiastic about so early in my reading challenge! When I picked it up, I had high expectations for it: you don’t see many books that feature seafaring adventures, so I was excited to read it. Plus, it’s published by Orion, and anyone who knows me would be aware of how much I love this publishing house. Unfortunately, my expectations weren’t met. Viper wasn’t for me, but this is just my opinion.

Since I tried to be thorough, this review ended up being extremely long. If you don’t want to read the whole thing, I have included a TL;DR section that summarises it at the bottom, so just scroll down!

I am a sailor and a massive lover of the sea. I even wrote one of my dissertations on ships and seafaring! I appreciated the author trying to set an adventure on the high seas of an archipelago, as it’s not an easy task to do. At first I liked the dual portrayal of The Maiden’s Revenge as prison and as home. In the beginning (and a little at the end, perhaps), these feelings are very present, making the setting relevant and exciting. As the story goes on, however, ships become mainly a means of transportation or a means of conflict, not in any way different from other novel whose focus is not seafaring.

“If the Maiden is my prison, then it is the ocean who is my gaoler.”
– Viper

I liked the idea of Marianne being averse to killing and bloodshed. I think it marked her as a definite opposite to Adler and set her up for a character arc of personal growth and discovery. There are moments in which she seems to struggle with anger issues (who wouldn’t after her upbringing) and I thought it a nice touch. However, I would have preferred it if it posed itself as a cause of her own undoing, so to speak, thereby offering the character a chance to grow from that. Instead, the “darkness” within her is exhumed only to show how good she is at keeping calm to make good choices, or as an attempt to create tension whenever she is about to commit to anything. Being this a story written in the first person, it is even more important to have a protagonist which is complex and intriguing enough to sustain the reader’s attention. Unfortunately, Marianne’s character eventually took a turn for the tedious, partially due to the lack of change and growth of her persona.

“Darkness has me in its unrelenting grip. Revenge is my mistress and I will be obedient.”
– Viper

In a cast of characters that I overall found flat and stereotypical, Grace stood out. It makes little sense to me that the Guardians and the western royal family did not live in the same place given that the Guardians are meant to… guard the royals, but she eventually looks after Marianne on the Maiden. Although her true identity is revealed very awkwardly in the narrative, making it feel out of place, I liked her wild and witty character. She is full of irony and offers Marianne chances to decompress. She lets Marianne go out in the world to explore it and takes every occasion to live the moment to the fullest.

“I distract myself by mentally tracing the lines around the white patches she has in her skin… When I was younger I used to imagine she had a whole map over her body, a world entirely of her own.”
– Viper

I appreciated the queer relationship between Sharpe and Torin. If explored more in the series’ next instalment, it could offer a new and interesting spin on the (very trite) love triangle trope. It’s a shame that this secret relationship is introduced without really exploring either character or how they relate to Marianne beyond “Torin is pure” and “Sharpe is moody.” I am told that they’re forbidden lovers, but not shown, which was a huge disappointment.

Lastly, I have to commend the author for not shying away from the blood and the violence. I do think that at times it is somewhat inaccurate, but I always appreciate it when an author does not sugarcoat things for their readers. In Viper, the nitty is nitty and the gritty is gritty; half of what happens in the story would have not had the same impact had it been censored. Many action and combat scenes are also well-described.

The novel presented, in my opinion, several structural problems that prevented me from fully enjoying the story. I divided them in sub-sections, sometimes employing bullet-points for simplification. I tried to be as thorough as I could; if my book received two stars, I would like to know why.

More than once I had to put the book down to reflect upon what I had just read. I don’t know if these things will be clarified in the next instalment in the series, but as they stand in Viper, I struggled to glean their logic. Below is a list of the ones that jumped out to me the most:

The cast was flat and stereotypical. Bronn is the broody childhood friend who is forced to stay away from protagonist. Torin is the absolutely wonderful and pure betrothed to contrast him to give a semblance of a love triangle. Marianne is the ultimate selfless heroine who is secretly extremely powerful and knowledgeable. By page 14 I had predicted Grace was going to die because of the role she was assigned.

All the evil characters are portrayed in the same way: with some unpleasant physical trait, drunk, violent, cocky and ready to sexually assault the protagonist. Adler is the stereotypically evil father with no trace of humanity; he has no other qualities besides being evil. This is true also for all the other evil assassins and the King.

On the other hand, good characters are portrayed as cheeky, gentle, brave, and motherly/fatherly. Joren the farmer and his family are goodness incarnate; they have no other characteristics besides being good, making them sickeningly perfect. The book proves in the space of one chapter that farming never works out for criminals in yet another cliché scene in which the perfect family is murdered – technically with the intent to give Marianne more reasons to pursue Adler.

Ultimately this led to me not caring particularly for any character. I was not invested in any of their lives or plights, as they held nothing intriguing for me to explore or be curious about.

What probably shocked me the most about this novel was the lack of trust in the readers on the part of the author. Every single interaction is explained, leaving no space for empathy or tension. This happens every few lines, after each event and in the middle of each short dialogue, to the point that I felt I was being spoon-fed the story. There is a huge amount of telling and very little showing.

The narrator also feels the need to repeat (multiple times!) what has happened in the previous chapters, something which eventually had me skip over paragraphs as it had become tedious. Some of the things that keep being repeated over and over again are:

Descriptions in the novel amount to pockets of information-dumping that don’t do much in terms of world-building and story. I would have liked to actually experience the islands, especially after Marianne states several times how much she craved exploring them. Instead, they only amounted to a few paragraphs on how they fit in the general world order and a couple of details about their appearance.

Other times, there are useless and distracting descriptions at inopportune moments. Tense moments involving death and destruction featured descriptions of Bronn’s or Torin’s beauty and how their clothes stuck to their perfect bodies. This happens to be a major pet peeve for me. How is any of that of any relevance to the current heightened moment? They felt corny and out of place to me.

This novel is an example of how, sometimes, less is more. It seems like the author had way too many ideas and tried to cram as many arcs as possible into one book. The story, in my opinion, needed to commit to one or two things and really explore them in depth to bring a stronger sense of coherency and progression. I tried tracing the switch in arcs and came up with something like this:

En fin, there is so much that it felt like nothing happens in 400 pages. As a result, pacing is practically non-existent and the story unfurls as a flat line. The beginning and the ending were very enjoyable to read, but the middle felt messy. Had there been more space to explore the war preparation and the interactions among the main characters, for instance, the story would have been, in my opinion, richer, more enjoyable and focused.

Would I recommend this book? No, not really.

Other books like this: If you enjoy high-fantasy settings and powerful female protagonists, the Throne of Glass series by Sarah J. Maas might be for you.
(Link redirects to Goodreads)